Letters From Ren
The History of Paradigm Vineyard

The 2014 harvest marked mine and Marilyn’s 50th harvest together and our 24th since we started making our own wine instead of selling all our grapes to other wineries.  The harvest started on September 1st and finished on October 11th when our last Cabernet Sauvignon grapes from block 2 were picked.  The overall crop was a bit smaller than average due to drought conditions and the resulting wines are among the finest we have yet to make at Paradigm.

Block 1 of Cabernet Sauvignon was replanted in 2012 and for the first time a few tons planted to clone 412 Cabernet on 1616- C rootstock became part of our blend.  This bought the total number of Cabernet clones in our wine to six and featured three different rootstocks.  The final blend is 90% Cabernet Sauvignon, 8% Merlot, 1% Petit Verdot and 1% Cabernet Franc.

The wine spent 20 months in 50% new French Oak barrels and 50% once used French Oak followed by 20 months in the Paradigm aging cellar.  The resulting wine is another fine example of winemaker Heidi Barrett’s skill and reminiscent of both the 2007 and 1999 vintages- rich ripe fruit, mouth coating flavors, and beautifully integrated layers of refined French Oak.

Marilyn and I hope to see you soon at Paradigm, 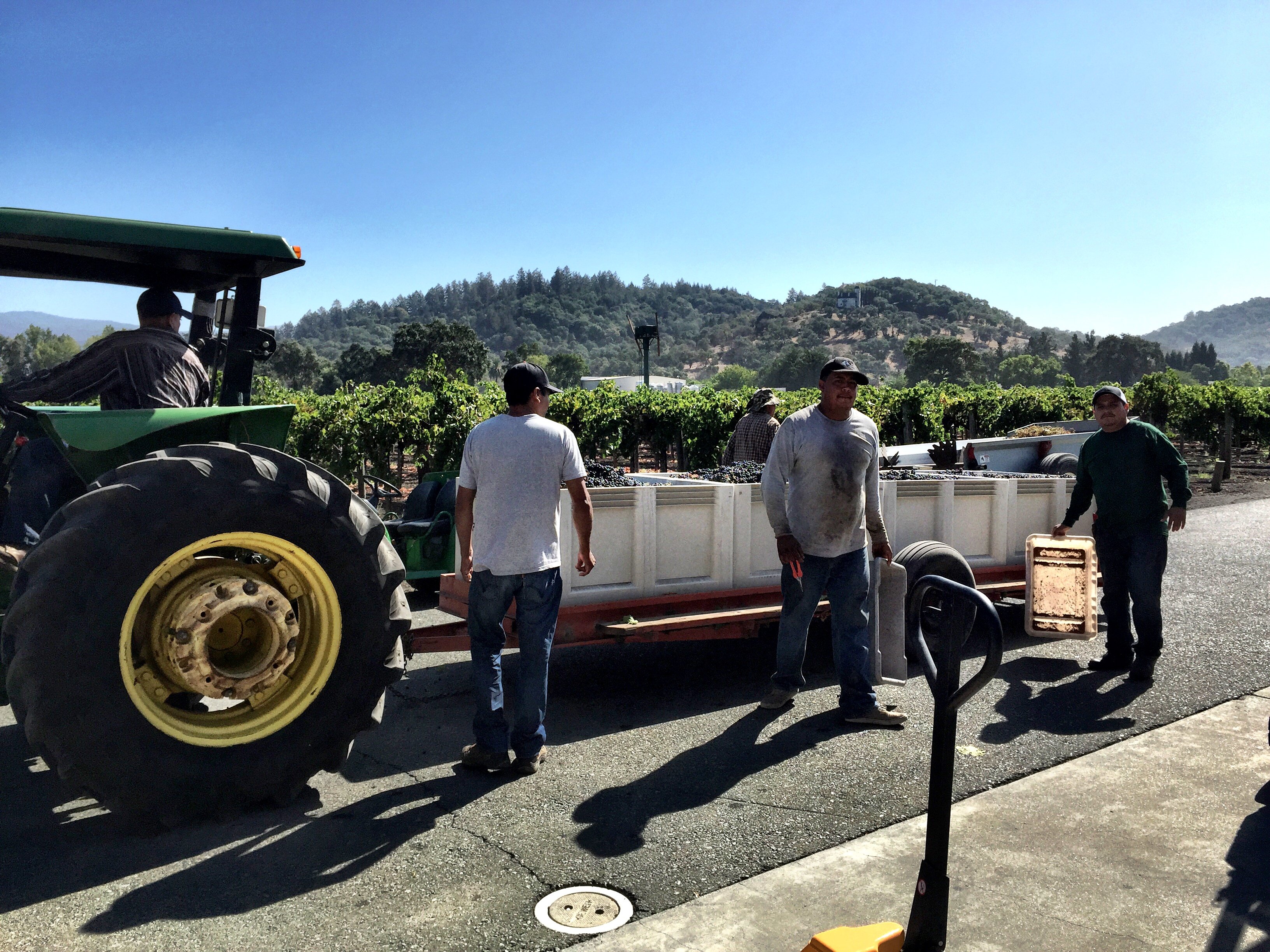 This year, 2017, has been a year of extremes. After dealing with drought or near drought conditions for six years we had 200% of normal rainfall at Paradigm - over 56 inches. This, of course, meant greener and grassier brush in the hills around the valley which in turn provided an unusual amount of fuel for the fires that hit on October 8th.

Paradigm survived both onslaughts rather nicely and we finished harvest ahead of the threat of smoke damage to our wines. We have spent the last three weeks sort of putting the vines to bed for the winter. There is much to do in the vineyard after harvest which needs to be completed before rain keeps us out of the vineyard except on foot.

The list of “to do” items this year saw the added task of having to replace potassium that was leached out of the soil by the extremely heavy rainfall. The rest of the items; seeding the cover crop, spreading 300 plus tons of compost, deep ripping every other row and installing the trellis system for the 5 acres we planted this year is done as of today - the rain is due to start tomorrow.

One last task - on Monday we pick olives from the 117 trees we planted five years ago and get them to the olive press - over 100 pounds (hopefully).

Meanwhile the wine has been fermented, sugar to alcohol, and now has started the malolactic secondary fermentation. We will move the wine from clean tank to clean tank on a weekly basis, keeping all the lots separate and clarifying the wine in the process. Around the tenth of December we will begin to barrel down the wine and the new barrels are already being prepared for use until the 2017 wines are bottled in July of 2019.

Lastly, we have added 14 year old grandson Kevin to the payroll since his older brother Kingsley went off to college at SOU. Kevin’s job is to pack the wine shipments we send throughout the country; mostly to those of you receiving this email

This was my 54th harvest in Napa Valley and one to be remembered! 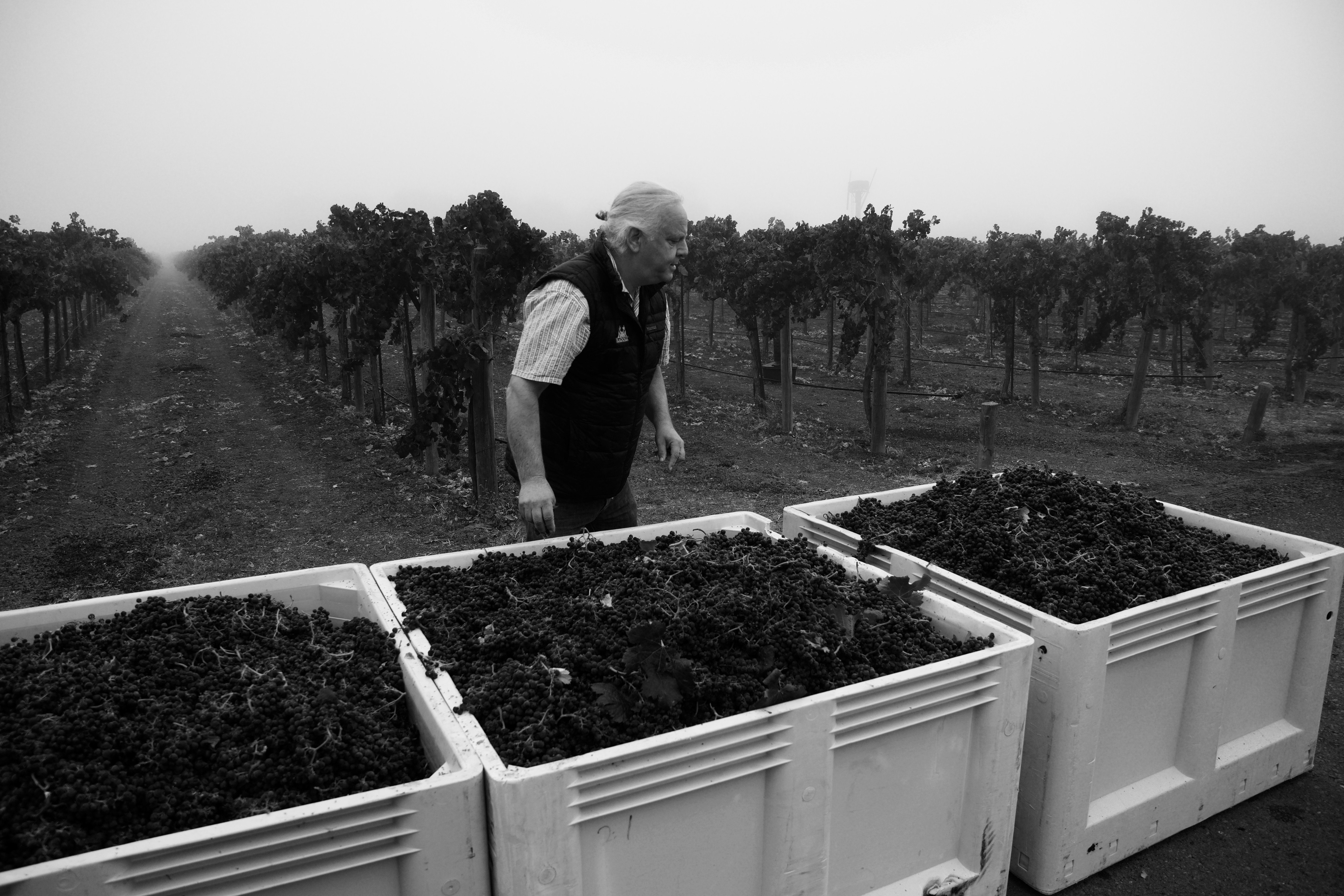 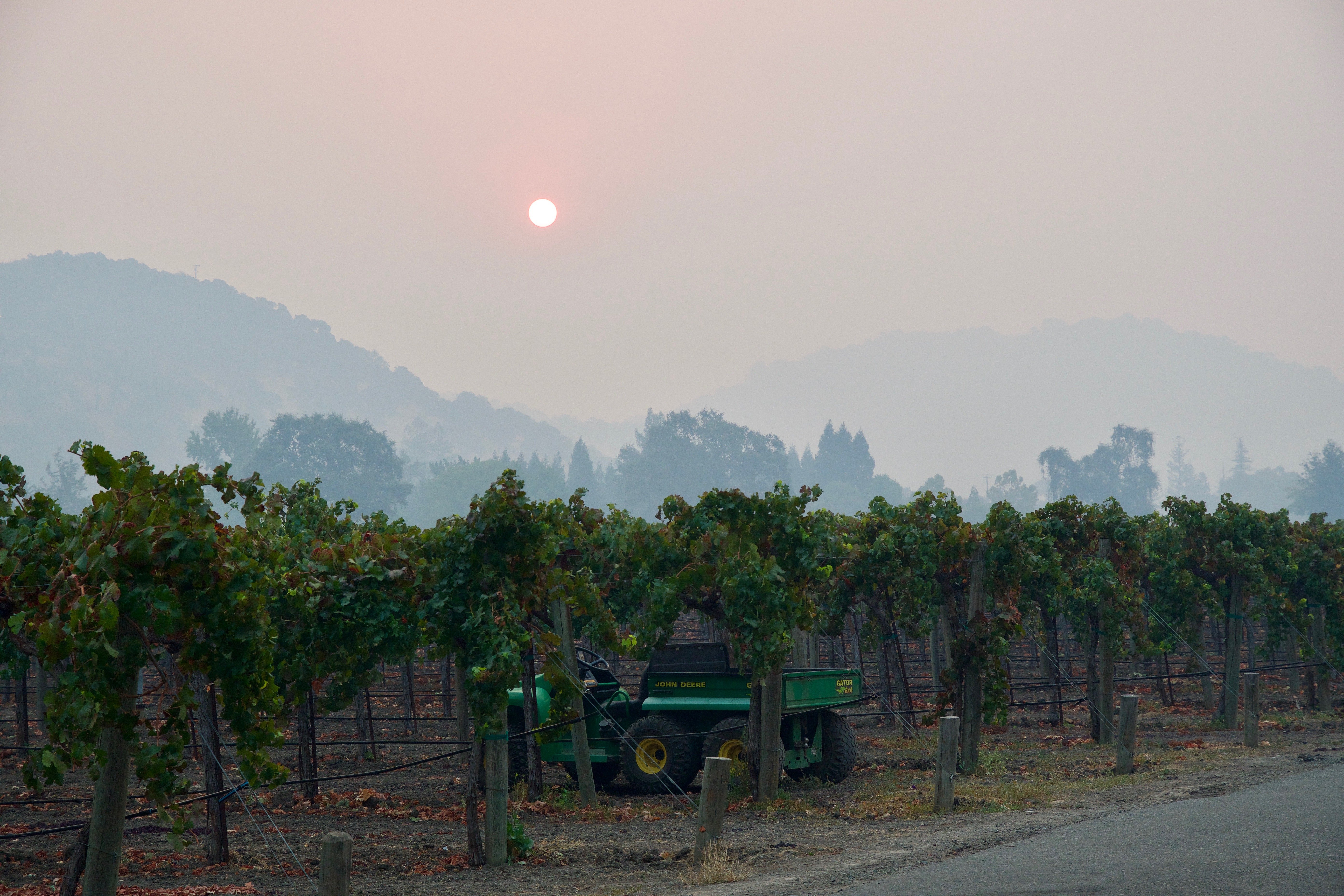 PAST, PRESENT, & FUTURE AT PARADIGM

The Biggest Change during my fifty plus years in the grape and wine business in Napa Valley is the availability of plant material.  While there have certainly been improvements in virtually all segments of our world, few of them would have had much impact if we were still dealing with the rootstock and budwood we were using when I arrived in 1964.

It was simpler in 1964.  You chose between AXR and St. George for rootstock and then decided on what variety of grape you wanted to grow.  Then you talked to friends and neighbors about how your chosen varieties were working for them and if the reports sounded good you asked them for some cuttings from their vineyards to bud onto the rootstock you had planted in the Spring.  It was kind of tricky because budding occurred when the budwood was ripe and this occurred during harvest- it made for a busy Autumn.

Today we have dozens of rootstocks to choose from; each one exhibiting different characters and working better in some soil types.  The choice of budwood no longer depends on word of mouth and is rarely sourced from local vineyards; we now have dozens of Cabernet Sauvignon clones to choose from along with numerous clones of other varieties.

We now also have reasonable expectation that the plant material we get is disease free thanks to the research and development of the many institutions that our industry supports and upon whom we depend.

We are now releasing our 2013 vintage wines.  The crop was smaller than average due to very small berry size even though the number of grape clusters harvested was normal.  The result is wines very dark in color and quite rich in character.  Also the two new blocks (9 & 10) of Cabernet Sauvignon planted in 2010 are part of the Cabernet blend from Paradigm for the first time.  The clones 30 and 169 we are planting this year will first appear in our 2020 Vintage which will be released in 2024- I’ll be 83!

As of 2017 we are using four different rootstocks and seven different clones of Cabernet Sauvignon.  Now instead of visiting neighboring vineyards and looking at vineyards from which to choose budwood we talk to fellow vintners, get samples of their wines based on clonal selection and decide according to wine quality and how we think it will fit into our program at Paradigm.  We then order the rootstock already budded from the nursery. 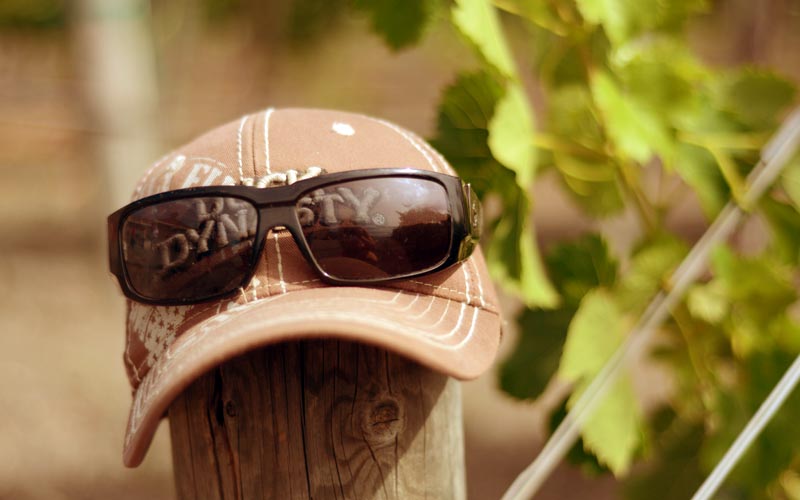 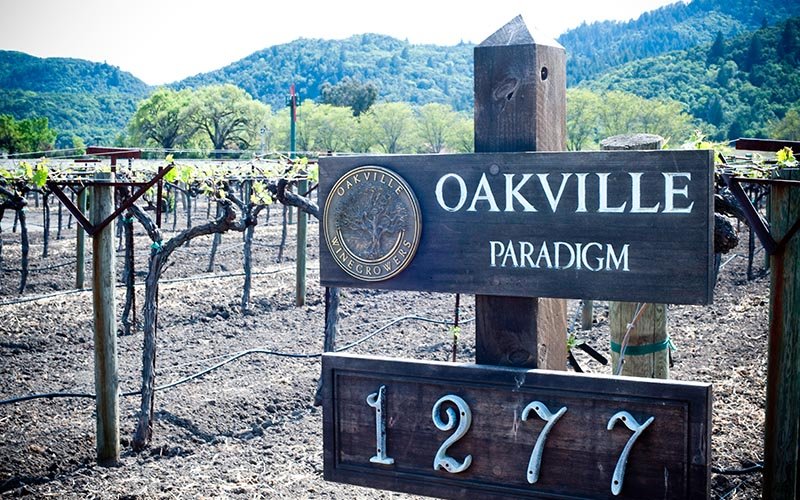 At Paradigm we use a cork that is 5.4cm. long (2 1/8”).  This is a bit longer than the standard4.7cm (1 7/8”) used in bottling many if not most wines around the world.  Our thinking is that the wine will be better protected from leakage over time if a longer cork is used since much of our wine is kept in folks cellars for several years.

I was reminded at the annual Taste of Oakville held on April 24th of this year that corks can become brittle after a couple of decades in the bottle.  Along with the 1995 Paradigm Cabernet there were several other wines from the 1990’s (Groth, Mondavi, Heitz Martha’s Vineyard) to be opened and served to almost 200 people.  This meant that almost fifty corks had to be carefully pulled and I along with two helpers got the job.

When corks become brittle they tend to break, crumble or dive into the bottle itself; sometimes a combination of all three problems can occur with the same cork.

Over the years I have used various methods in dealing with old (sometimes extremely old) corks.  Initially I would use a short half inch round dowel and a small hammer.  I would place the dowel on top of the cork after removing the foil and gently tap the dowel with the hammer until it moved slightly into the bottle.  This would break the seal between the cork and the bottle; thus making the cork easily removable with a standard corkscrew.  The downside was that the cork would sometimes slip all the way down into the wine.

Then the Ah So arrive around 1980.  This two pronged tool works very well on younger wines but the same danger I experienced with the dowel and hammer routine was even more likely to occur with the Ah So on older wines.

This left me with the tried and true method of using a standard lever pull corkscrew but rather than stopping to use the lever function I would twist the screw as far as possible into the cork, thus making the lever inoperable, and putting the bottle between my knees to pull the cork.  This can on occasion be detrimental to one’s back.  It can also result in pulling the middle out of the cork leaving a crumbing mess both inside and outside the bottle.

About ten years ago a friend arrive at our home for a dinner party with a 1963 Fonseca Port and a device for pulling the cork called a “Durand.”  This is a combination Ah So and corkscrew!  First you twist in the screw and then slip the Ah So into the two slots on top of the screw device.  Old ports have notoriously poor corks and the Durand was the answer.  Since this event I use the Durand on all bottles over ten years old and while it may take a bit longer to get it done it just doesn’t fail.